OUR APARTMENTS AND PLACES OF INTEREST

Montcada Street was opened in the mid-twelfth century by the family of the same name in order to communicate the Barcelona neighborhoods Bòria and La Ribera. The lands were owned by the Montcada family and soon became the quintessential bourgeois way of the medieval city. Numerous palaces opened their doors to the street between the fourteenth and eighteenth centuries, when the decline of bourgeois character of this street began.

Portal de l'Àngel is a pedestrian street in the Ciutat Vella district of Barcelona adjacent to Plaça Catalunya, and part of the large shopping area that spans from Avinguda Diagonal to Barri Gòtic. It's one of the city's most visited streets and is always crowded with tourists and locals all year round.

Diagonal Mar i el Front Marítim del Poblenou known as Diagonal Mar, is a neighborhood located north -east of Barcelona. This district was created in the late 60s and early 70s with the construction of the first homes where before were fields and farmhouses. After the ceremony the Universal Forum of Cultures, held in Barcelona in 2004

Plaça d'Espanya, also known as Plaza de España in Spanish, is one of Barcelona's major squares. It was constructed for the event of the 1929 International Exhibition, held at the foot of Montjuïc, in the Sants-Montjuïc district. Since then Plaza Espanya is hosting numerous international expositions, fairs or festivals. This square is also an important transport hub that serves most parts of the Metropolitan Area of Barcelona, it is the first stop of Aerobus coming from the airport as well.

The Gran Via venue, designed by Japanese architect Toyo Ito, is one of the greatesr trade fair complexes of Barcelona city. It has 240,000 m² of exhibition floor space divided into 8 pavillions. This exhibition center has the most high tech infrastructures and an extensive range of services. 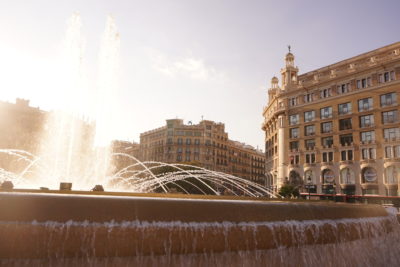 Plaza Catalunya is the most central point of Barcelona. "Las Ramblas" begin from this square, the famous pedestrian avenue which goes all the way down to Barcelona's Port. It is the limit between the two neighbourhoods, the Gothic Quarter and Eixample. You will find many stores on the square, as well as restaurants and cafes and a big shopping center.

Passeig de Gràcia is one of the major avenues in Barcelona (Catalonia) and one of its most important shopping and business areas, containing several of the city's most celebrated pieces of architecture. It is located in the central part of Eixample, stretching from Plaça Catalunya to Carrer Gran de Gràcia. Passeig de Gràcia is regarded as the most expensive street in Barcelona and in Spain. 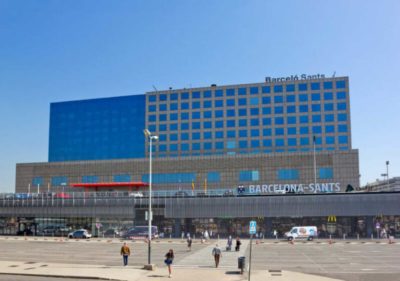 Considered one of the most used transport hubs in the city, Barcelona Sants station is the primary train station for national and international arrivals and departures. Situated in the west of the city, it is easily reached by bus, taxi or the metroMetro (Blue Line, L5) and (Green Line L3) who's lines both have a stop here. If you are driving, there is outside parking behind the station.

Located in the building of the former railway station, dating back to 1861, the Barcelona Nord Bus Station is now the main arrivals and departures terminal for buses travelling through the city of Barcelona. Buses leaving for the majority of Catalonia’s counties, the rest of Spain and primary European and North African cities depart from this station.

Sant Pau del Camp is a Romanesque building dating from 1117, on a cruciform ground-plan with a triple-domed choir and a massive crossing-tower. Note the beautiful main door, with its marble capital from the West Gothic period. The groin-vaulted interior adjoins the Gothic chapter-house on its right, which in turn leads out into the cloister.

The best ride in the city is to the castle at the top of Montjuïc, several minutes of shrieking and gasping as you ride in the 4 person pods, above the port and harbour, with fantastic views of the city. The cable car runs between Miramar and Montjuïc across the harbor to Torre de Jaume I, and on to Torre de Sant Sebastià. You can board at either stage. 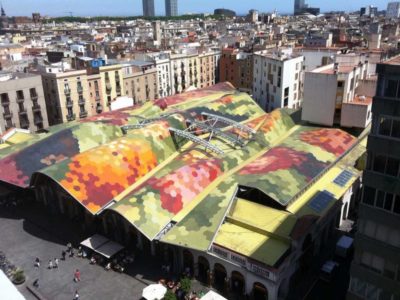 Situated in the centre of Ciutat Vella, in Ribera Quarter, Santa Caterina Market has been an exceptional witness of Barcelona history as it was the first covered market in the city. The construction of the market started in 1844 and the market was opened in 1848, trying to favour the food supply for the city popular sector and to have a place in the city devoted to wholesale and retail commerce. 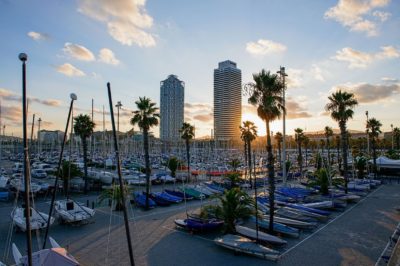 The Olympic Port is one of the legacies of the 1992 Olympic Games. The Olympic Port's most recognisable feature are the two towers that flank either side of the port's entrance. One is an office building, the other one is the luxurious Hotel Arts. At night, the Olympic Port turns into one of the busiest nightlife spots in the city. It offers an abundance of restaurants, bars, clubs as well as the casino.

The Plaza Monumental de Barcelona, often known simply as La Monumental, is a bullring in the city of Barcelona, Catalonia, Spain. It was the last bullfighting arena in commercial operation in Catalonia. It was inaugurated in 1914 under the name Plaza de El Sport and was immediately expanded and renamed in 1916 with its current name. It is situated at the confluence of the Gran Via and Carrer Marina (Marina Street) in the Eixample district.

A fun way to see Barcelona's coastline and the city itself from a different perspective is to jump on to one of these boats, or Golondrinas, which will take you from the harbour out to the breakwater (35 mn) or as far as Port Olimpic (1h30). Harbour tours are operated from the Mirador de Colom at the seaward end of La Ramblas, and near the maritime museum. 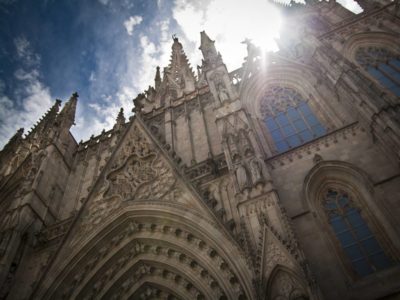 The Cathedral is a beautiful example of Catalan Gothic architecture, started in 1298. The complicated facade was added much later, in the 19th century. The Cathedral is to be found in the heart of the old quarter in Placa de la Seu and is surrounded by buildings of interest. Every Sunday at noon, local people gather in front of the Cathedral to dance the famous Sardana, the Catalan national dance.

Torre de Collserola is a uniquely designed tower located on the Tibidabo hill in the Serra de Collserola, in Barcelona, Catalonia, Spain. It was designed by architect Sir Norman Foster and built in 1991 by construction company Cubiertas y MZOV S.A. for the 1992 Summer Olympics. It features a pod for floor space like many towers but uses guy wires for lateral support like a mast. 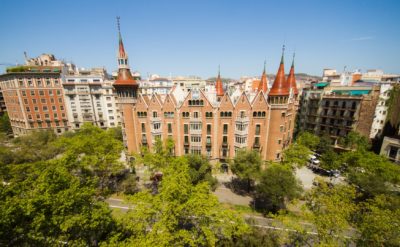 Built in 1905, this is the most delightful building of the modern area of Barcelona, named also Casa Terrades. Designing that building with some medieval appearance, the architect Puig i Cadafach was influenced by Nordic style. The façade was made in brick, and the ornaments around the windows and doors in stone.

Inaugurated in 1908, after three years of building work orchestrated by the famous architect Lluís Domènech i Montaner, it is one of the most characteristic modernist buildings in the city. It is also one of the world's major concert halls and an excellent example of Catalonian Modernism. The interior is decorated with ceramic mosaics and polychrome glass with floral motifs. In 1997 it was declared a World Heritage site by UNESCO.

show, direct heir to the purest of traditions. The show, which lasts 75 minutes, can always boast artists of the most widely-acknowledged prestige who are accompanied by young promises for who, since time immemorial, the tablaos have served as a school and as an artistic springboard

It was conceived as a residential town although the houses were never built and it ended up as a public park. It is considered to be one of the most important art nouveau works in the world. It is based on the English garden towns. It was built on the Pelada Mountain, with views of Barcelona and the sea. Casa Rosada was all that was built by one of Gaudí's collaborators. It was declared World heritage site by UNESCO. 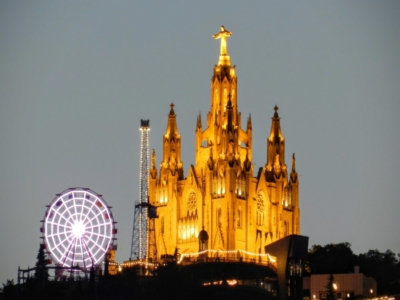 The mountain of Tibidabo is the highest point of the Collserola hills, it hosts an amusement park.Everyone in the city remembers its fantastic grottoes, the dizzying experience of the Talaia, the Hall of Mirrors with its grotesque reflections, the excitement of the Aeromàgic, the fascination of the old fair of automatons. Sensations which can now be rediscovered by young and old. 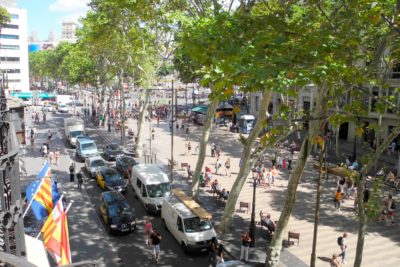 The Ramblas is the best known landmark of Barcelona. From Plaza Catalunya to the Columbus statue, it is filled with newspaper kiosks, flower and animal stalls, and all sorts of artists. It is undoubtedly the place where everyone comes together, both tourists and locals. Of interest are the Opera Liceu, the Mercat de la Boqueria or exhibition centres such as the Palau de la Virreina. When you feel tired, have a drink at one of the many terraces.